Home Office Refuses FOI Request on the Prevent Oversight Board

In April we submitted a Freedom of Information (FOI) request to the Home Office about the Prevent Oversight Board.  As we explained in our blog post at the time, the Board can be seen as an example of internal review and demonstrates how review can happen in layers and at different levels of opacity.  As there is little public information available about the Prevent Oversight Board or its workings, we submitted the following questions under the Freedom of Information Act 2000 to the Home Office to try and find out more about this potentially illuminating aspect of CTR: 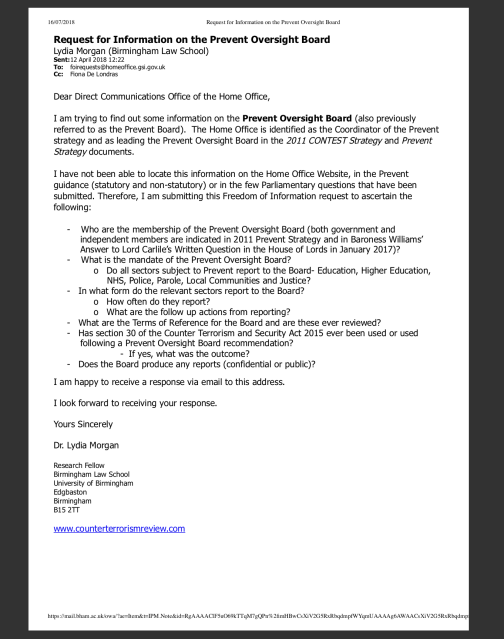 On 11 May 2018 we received a letter addressed to us – the all-female research team – as ‘Dear Sirs’, notifying us the Home Office response would be delayed, as is permitted when the matter is potentially subject to an exemption.  We were told to expect a response “on or before 11th June 2018” and informed that our request was being considered under the exemptions provided in sections 24 (National Security) and 35 (Formulation of Government Policy, etc.) of the FOI Act 2000.  Both of these exemptions are ‘qualified’ exemptions which means that in deciding whether to release the requested information, the Government must apply a public interest test.  As the Information Commissioner’s office explains in its guidance “A public authority can only withhold the information if the public interest in maintaining the exemption outweighs the public interest in disclosure.”

We finally received a response on 14 June 2018, three days after the deadline that the Home Office set for itself.  You can see the Home Office’s response here. The brevity was no surprise, but the generic approach applied was disappointing; we had expected each question to be considered on its own merits. Instead, we were simply informed that the information requested was exempt from disclosure, either under section 24 (national security), section 35 (Formulation of Government Policy) or section 21 (that the information is already reasonably accessible even if only upon payment).  We are unhappy with this response, and so are requesting an internal review, following the procedure outlined in the code of practice issued under section 45.

It is tempting to suggest that the Home Office’s refusal to release even basic information about the Prevent Oversight Board uses the national security and formation of government policy exemptions to avoid more in-depth scrutiny. That is why we are responding to the decision not to disclose the information we have requested under these exemptions in detail. It is also tempting to think that the Home office draws the ring of confidentiality wider than actually necessary, as much for political expediency as to protect information that is reasonably necessary to national security or the free and frank discussion of government policy.  In reality, it is better to take the Home Office at its word and challenge the decision in the way prescribed by the law.

Our request for an internal review of the Home Office’s response is available here. In doing so, we have made four board claims.

First, that the response to the FOI was improperly handled because it (a) expanded the terms of the request and (b) misconstrued the information that we sought and the purposes for which we sought it.  We asked merely for information about the structure of the board and the form and frequency of the reports it receives and considers. We did not ask to be granted access to those reports or to see even a summary of their contents.  Secondly, that the public interest test used for the section 24 exemption did not consider all of the relevant factors and landed on highly improbable conclusions to reject our application for information.  Third, while the substantive parts of the refusal focus on the national security and formation of policy exemptions, one element of the response attempts to employ section 21 which allows an exemption if it is available elsewhere and, under section 21(2)(a) which the refusal specifically refers to exempts information that is reasonably accessible only on payment.  We found this a curious position to take since the response referred us to the same information that we had already highlighted to them and linked to Hansard which is freely available online.

Finally, that the response applies the exemptions overzealously and at odds with the intentions of the presumption in favour of disclosure in the FOI Act 2000.  Considering the significant weight placed by the Government on the importance of the Prevent duty, the government has a democratic duty to provide information about how it is monitored by the Prevent Oversight Board and its parent department the Home Office.

We will update this blog post when we hear the outcome of our request for an internal review.